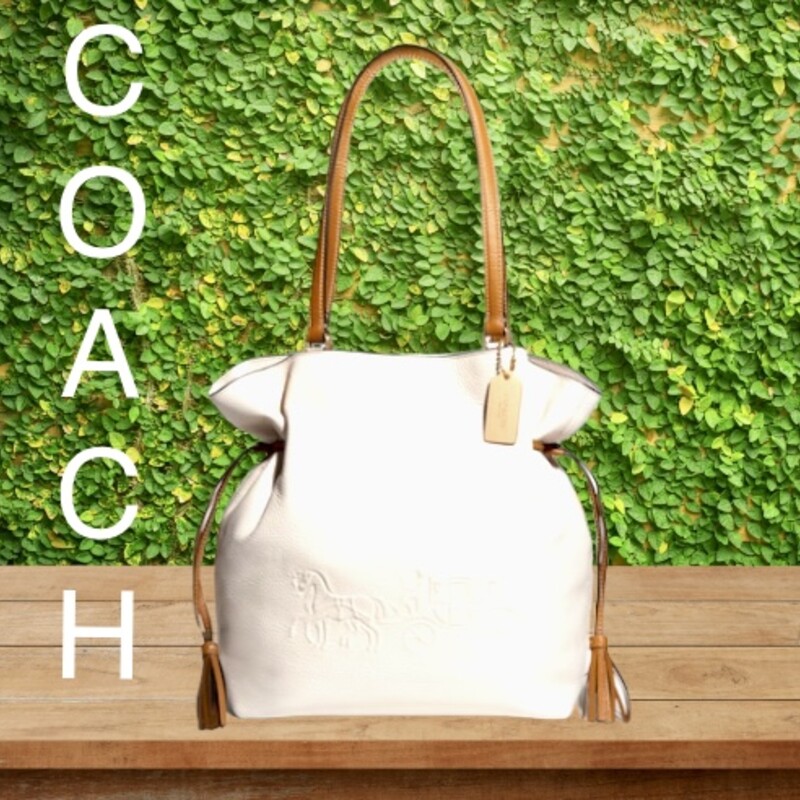 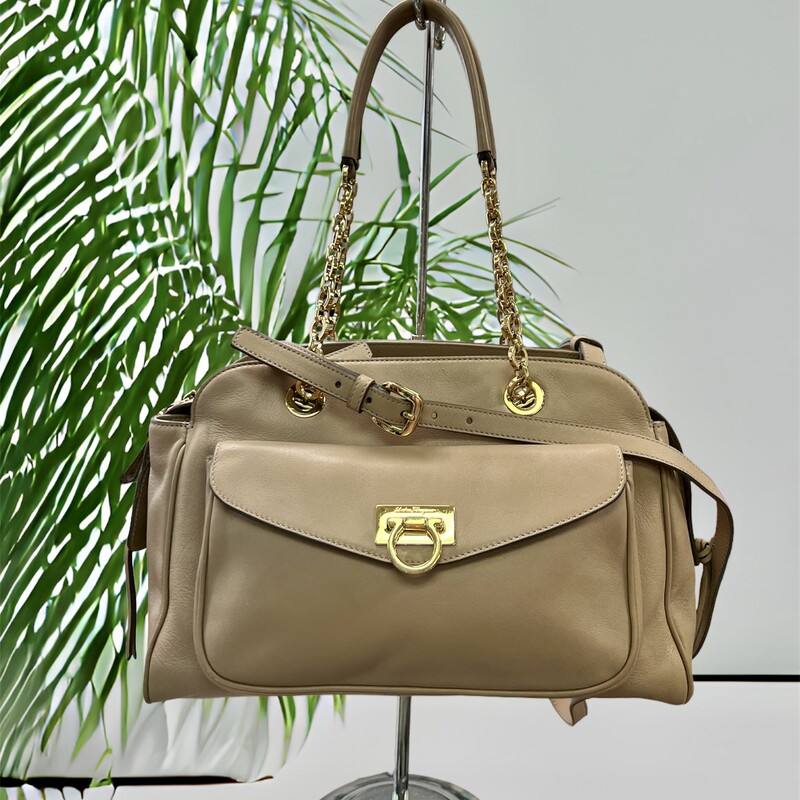 DIOR This is an authentic DIORL Silk Printed Square Scarf. This elegant scarf is crafted of 100% silk. Size: Length: 34 in Height: 34 in Does have a small color transfer, no snags Learn More

FERRAGAMO Gancini Pocket Chain Bowler Bag Leather Medium Designer: Salvatore Ferragamo Dimensions: Height: 9.5 in (24.13 cm)Width: 13 in (33.02 cm)Depth: 5 in (12.7 cm) Period: 21st Century Material Notes: Exterior Material: Leather Exterior Color: Beige Interior Material: Fabric Interior Color: Beige COMES WITH CERTIFICATE OF AUTHENTICITY About the Designer: Salvatore Ferragamo Clothing A perfectionist who as a child crafted a pair of white shoes for his sister’s first holy communion because his parents couldn’t afford new footwear, Salvatore Ferragamo was ambitious from his earliest days. The young Italian shoemaker established in the years that followed what would one day become a fashion empire — the highly profitable multinational family-owned and -operated luxury brand today counts more than 600 stores in 96 countries around the world, and vintage Salvatore Ferragamo shoes, belts, handbags and other clothing and accessories are objects of desire for fashion lovers everywhere. Salvatore Ferragamo sought an education in the art of shoemaking when he was eleven — he apprenticed with a local shoemaker and spent a short time in nearby Naples learning what he could at a shoe factory. He opened his first shop with a handful of workers the following year, and in 1914 — when he was still a teenager — Ferragamo emigrated to America, just as his siblings had before him, seeking new opportunities for work and to learn in the footwear trade. After securing a job at the Plant Shoe Factory in Boston, Massachusetts, Ferragamo was uninspired by machine-made footwear. He moved across the country to Santa Barbara, California. Owing to a connection he made with a then-actor cousin, Ferragamo found work with the American Film Manufacturing Company. He made women’s shoes and provided durable cowboy boots for a film crew’s costuming department. Ferragamo’s reputation in the world of Hollywood cinema soon broadened, and he established a storefront in Mission Canyon where he made shoes by hand for the likes of actresses Gloria Swanson, Greta Garbo and Dolores del Río. By the 1920s, film directors commissioned Ferragamo to produce shoes for a range of movies — the list of films eventually included The Ten Commandments, The Covered Wagon and The Thief of Baghdad. When he felt comfortable enough with the English language, Ferragamo also enrolled in anatomy courses at the University of Southern California in Los Angeles in order to better understand motion and the demands that we place on our footwear. By the late 1920s, Ferragamo sought to expand production of his shoes and returned to Italy. He hired scores of apprentices to work in a factory in Florence, where Ferragamo carefully melded the principles of handcraftsmanship with all that he learned about America’s shoe factories. He filed patents — hundreds over the years — on the steel shank arch and many other unique aspects of his shoe design, and when economic and political influences during the 1930s forced Ferragamo to substitute pressed cork for steel to support the arch, the wedge heel was born. Other creative materials he integrated into his forward-looking creations were hemp, felt, nylon fishing line, fish skin and cellophane twisted with silk. In the late 1940s, the brand’s first storefront opened in Manhattan, and today Salvatore Ferragamo is known worldwide and is synonymous with a wealth of iconic footwear such as Viva ballet flats, Vara Bow pumps, Gancini loafers and lots more. Ferragamo’s son, Ferruccio, was appointed CEO in 1984. Under his leadership, Ferruccio diversified and expanded the fashion business further, getting into sunglasses, fragrance, watches and made-to-measure men’s shoes. Ferruccio was succeeded by his brother, Leonardo Ferragamo, and British designer Maximilian Davis is now creative director of the brand. Learn More

VERSACE LA MEDUSA SMALL HOBO BAG A stunning evening design with a contemporary curved silhouette, the small hobo bag is crafted in Italy from lightly grained calf leather. The striking design is a perfect companion for both day and evening looks, boasting a three-dimensional Medusa plaque - iconic décor that was discovered on the doors of the brand's first headquarters in Milan. Easily styled on the shoulder or across the body, the versatile design features an adjustable strap. -La Medusa plaque -Top handle -Flat internal pocket -Embossed logo on reverse -Outer fabric: 100% Calf leather -Lining: 100% Cotton -Made in Italy Size & Fit -Length: 20 cm -Width: 4 cm -Height: 13 cm -Handle drop: min 21, max 50 cm This bag is in great condition. Nordstrom has this brand new NOW for $1825.00 Rebag has it available in similar condition for $1170.00 and poshmark has it for $1131.00 Learn More

CHANEL Chanel Red & Stripe Canvas Cruise Line Chain Shoulder Bag with silver-tone hardware, red canvas lining, interior slip and zip pockets, dual chain leather shoulder strap, and zipper closure at the top. This bag does come with CERTIFICATE OF AUTHENTICITY! Resale website Grailed has this bag in similar condition for $1895.00 and 1st Dibs ha this for sale for $1516.00 About the Designer Chanel In the years following the opening of her modest millinery shop, Gabrielle \"Coco\" Chanel became a pivotal designer of both fashionable casual wear and Paris haute couture as well as an icon and arbiter of 20th-century style with her bob haircut and pearls. Today vintage Chanel handbags, jackets and evening dresses are among the most sought-after clothing and accessories for fashion lovers all over the world. The first Chanel shop was established in 1910 in Paris on rue Cambon by the young milliner Gabrielle Chanel (1883-1971), who had picked up the nickname \"Coco\" while working as a club singer. The boutique drew the attention of the Parisian fashion elite who popularized her wide-brimmed Chanel Modes hats. Soon she added a sportswear store in the Normandy resort town of Deauville, where Coco set the tone for her defining sense of style, traditionally masculine garments reimagined for feminine shapes, made from simple jersey fabric. Effortless and elegant, Chanel's designs promoted comfort and grace in women’s wear that had been dominated in the previous century by complicated layers of fabric and cumbersome corsets. She followed this success with a couture house, opened in 1915 in Biarritz. But Chanel was not born into a life of glamour. Following the death of her mother, her father left her in an orphanage where she lived until the age of 18. It was there that she learned to sew as well as appreciate the classic pairing of black and white as worn by the nuns. In 1926, she introduced her first little black dress, reclaiming a color that had once been reserved for mourning and working-class women. That same decade, she debuted her perfume, Chanel No. 5, as well as the Chanel suit with a fitted skirt, inspired by the boxy lines of men’s clothing and employing a sporty tweed. Chanel closed her fashion operations during World War II, then returned to the industry in 1954 to design for the functional needs of modern women. Structure and wearability endured in all of Chanel’s clothing and accessories, like the quilted leather 2.55 handbag introduced in 1955 with its gold-chain shoulder strap that freed up a woman’s hands. Chanel's collarless jacket reacted against the constricting styles of Christian Dior's New Look, replacing them with a design that was timeless, an instant classic. The 1957 two-tone slingback pumps had a practical heel height while offering a bold statement in the black tip of the shoes. After Coco Chanel died in 1971, the brand underwent several changes in leadership, including fashion designer Karl Lagerfeld, who took over as artistic director in 1983. Over the years, the company has continued to innovate, such as expanding into ready-to-wear fashion in 1978 and, in 2002, establishing a subsidiary company \"Paraffection\" dedicated to preserving the heritage skills of fashion artisan workshops. The House of Chanel still operates its flagship on rue Cambon in Paris, where it all began. Learn More